For the first time, a significant production loss could be traced back to a digital printing technology that is not compatible with the existing paper recycling system. For a long time it had been suspected that small flakes resulting from liquid toner films as used in HP Indigo’s production printers are difficult to remove. INGEDE issued its first press release about these problems already in 2001. Still, trials in labs and pilot plants did not lead to enough evidence to ban liquid toner prints from the deinking* paper mills’ list of raw materials. It had been assumed that sufficient dilution would allow the paper mills to cope with this new challenge.

In late August, paper engineers at a German paper mill were alarmed by rapidly increasing dirt speck numbersin control samples during the production of high quality graphic paper. Though an intense search within the raw material used began immediately, seven reels with 20 tons of paper each had to be dumped until liquid toner prints coming from a photo book printer could be identified to be the source. This material had been bought together with other high quality recovered paper specified as grade “Multi Printing” (3.10)**.

As the share of liquid toner prints had already been less than three percent, the remaining stock had to be diluted further and monitored carefully during the following weeks. The paper mill affected has the most sophisticated deinking plant in Europe, using a two-loop flotation system with two dispersers that were operated at high energy input during the production. The estimated paper production loss sums up to about 140 tons of premium quality paper. The damage for the paper mill — only for the paper dumped, not including standstill or others — is more than 100,000 Euros.

Liquid Toner Prints to Be Avoided

As a consequence, liquid toner prints should be avoided in recovered paper for deinking and directed towards corrugated board production only. In other mills where less effort is used to produce e. g. newsprint, a comparable load of recovered paper could have lead to even more intense quality problems.

Dirt specks also have to be avoided in tissue mills. INGEDE and its members now advise recovered paper merchants, to collect liquid toner overprint separately from other graphic papers and direct it toward the production of corrugated board.

INGEDE is an association of leading European paper manufacturers founded in 1989. INGEDE aims at promoting utilisation of recovered graphic paper (newsprint, magazines and office paper) and improving the conditions for an extended use of recovered paper for the production of graphic and hygiene papers.

* Deinking is the removal of printing ink from the recovered paper during the paper recycling process.

** The “European List of Standard Grades of Recovered Paper and Board” defines the composition of different grades. “3.10 Multi printing” is defined as “Woodfree, coated, lightly printed, free from wet-strength paper or paper coloured in the mass.” Indigo print samples from the original delivery, tested in the lab, after pulping (top) and after two flotations and one dispersing step (bottom). 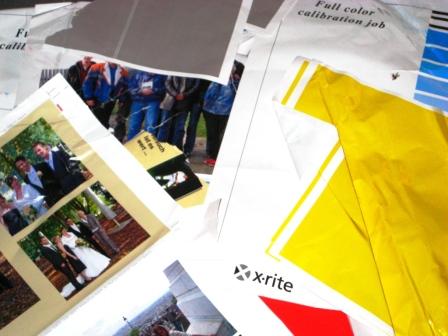 This press release in German and

The “European List of Standard Grades of Recovered Paper and Board“

back to previous page