Pay Attention to Recycling: Low-Energy and LED-UV Printing is Not Necessarily Environmentally Friendly

Coloured specks on the recycled paper: Just because the curing radiation can now be generated by energy-saving LEDs, instead of high-power mercury bulbs, some try to market UV printing processes to be environmentally friendly. However, the shiny appearances are deceptive: Prints with radiation-cured inks can considerably impair paper recycling because they can hardly be deinked.*

UV-curable printing inks to date hardly fulfil criteria for good recyclability. All inks tested so far contaminate the processed paper for recycling with far too many ink particles that can not or not sufficiently be removed during the paper recycling process. This is also the case for UV-curable inks used in some inkjet printers.

As small amounts of papers printed with UV-cured inks can impair the deinkability of a load of paper for recycling, UV-prints have to be kept separately where they accumulate, e. g. printer waste, and must not be mixed with other graphic papers for deinking. Once they have left the print shop, it is almost impossible to identify and separate them during collection and recycling processes.

Newly developed inks might be a way out, if they are designed to be removable in the paper recycling process: They should detach from the fibres under the alkaline pulping conditions, disintegrate into small particles, and leave the process clinging to the soap bubbles in a flotation cell.

Water is not better than oil: Check your ink’s properties

Different printing inks pose different challenges to the deinking process. Water based inks cause problems as they dissolve in the process water; cross-linked particles due to their size, flexibility or surface properties can neither be separated mechanically (screens) nor by flotation. This is why — also without UV-curing — most current commercially used inkjet inks are rated undeinkable. Already in small amounts they can lead to severe brightness problems in the paper mill.

Another cross-linked challenge is polyethylene liquid toner (HP Indigo), currently used for most of the photobooks. This is a thin plastic film rather than a conventional printing ink. During the recycling process, this film breaks into snippets, which cannot be removed sufficiently. These snippets have already led to significant damage in a paper mill, since then photobook printer waste must not be mixed with graphic paper for recycling and at best be used for corrugated board.

At the same time, with decreasing grammage of newspapers and more coloured illustrations, paper mills have to remove more and more ink from less and less fibres.

Together with ink manufacturers, the respective associations, and publishers paper mills continuously check the deinkability of current printed products. For this purpose together with the European Recovered Paper Council (ERPC) a scoring system has been developed.** Together the industries look for ways to replace poor deinkable printing inks by more recycling-friendly solutions.

* Deinking is the removal of printing ink during the paper recycling process.
** ERPC is the European Recovered Paper Council. The “Deinkability Score” system is available from the ERPC website www.paperrecovery.org. 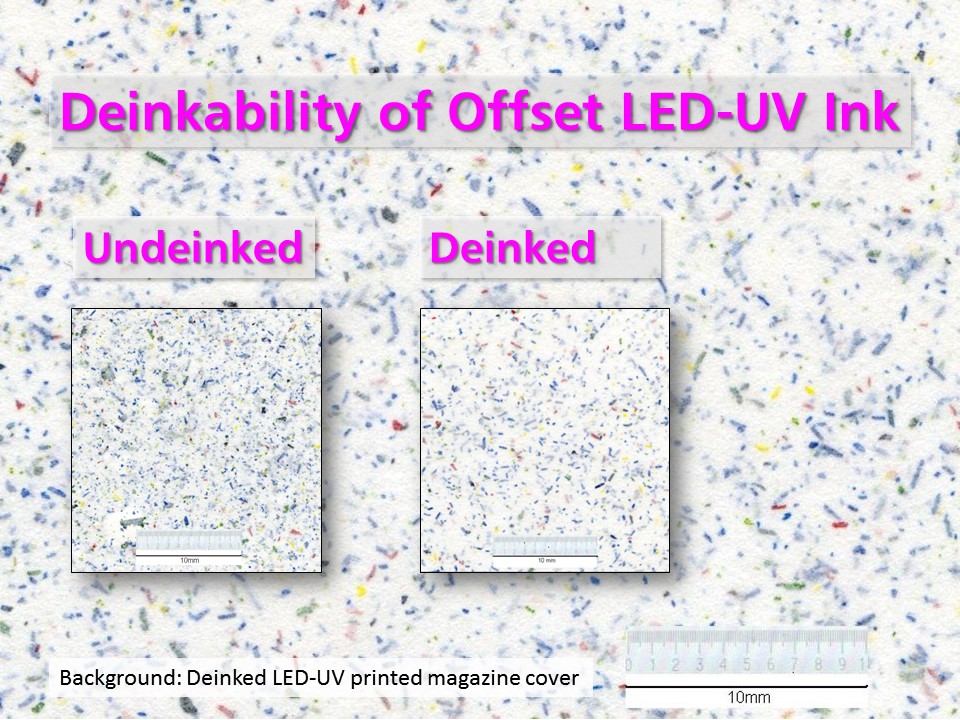 Illustration (click to enlarge): LED-UV printed magazine cover before and after deinking

This press release in German, it will soon be available

The “European List of Standard Grades of Recovered Paper and Board“