Paper is sustainable. And it has a great future!

Emma does not believe in digital gadgets.

PAPERbecause has a similar plot: "Jason and the paperless office". And "Tech Support" illustrates a familiar problem. 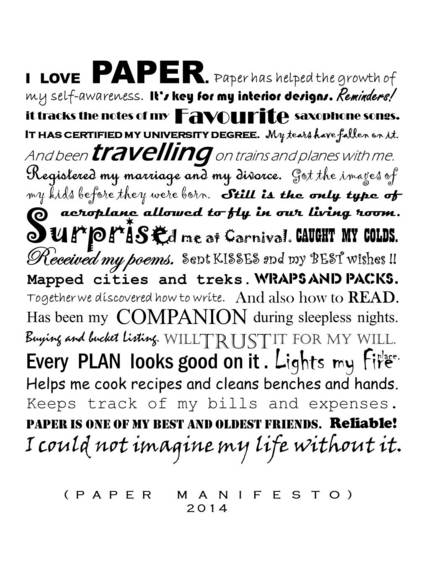 Paper & Packaging – How Life Unfolds™
is a promotional campaign from the Paper and Packaging Board (P+PB).

IKEA promotes the Printed Catalogue — and promotes its version of "BOOK".

“Is print really dying? Not according to Ikea, which has good reason to still believe in dead trees. After all, the company prints around 200 million copies of its catalog every year in 27 languages for 38 countries. That’s more than twice the number of bibles produced in a given year.

But is a print catalog too low-fi for the high-tech age? Again, not according to Ikea, which just rolled out this amusing promo for the 2015 catalog, slyly suggesting that print is actually a wondrous technology that equals—nah, exceeds—the power of digital media.” (Tim Nudd in AdWeek)

And if you think this looks familiar, here is also the original: Book.

Update: By end of 2020, IKEA literally decided to close its books. It is ending the 70-year run of its iconic catalog, the typical 300-page catalog, which peaked at 200 million copies distributed through its stores and in the mail in 50 markets, 69 different versions, and 32 languages. (Forbes and other news)

Produced by the German vdp:

Does the paper industry destroy forests? Does the production of paper use too much energy? Answers to these and more questions.
(photo: vdp website)

Seriously, regarding carbon footprint, how dirty is your data?

And: How do you recycle your electronic newspaper?

This Greenpeace video highlights severe the contamination generated by electronic waste in Ghana.

Dateline (Australian TV) has the same story: Treatment of electronic waste in Africa, where kids do the job.

Where does e-waste end up? Another destination: India.

Power, Pollution, and the Internet

James Glanz of The New York Times and Ken Brill, an expert in the field, tour a data center and show what is required to keep it going even when power goes out.